After we checked in, our first stop was the Exhibit Hall… you know, to check it out for filming later.  We met a lot of great people and saw many great items. Friday we plan to return with the camera and live stream what we can.  We stopped into the blogger center and connected with Heather Wilkinson Rojo from ‘Nutfield Genealogy‘ blog, and she promptly introduced us to Thomas MacEntee of ‘High Definition Genealogy‘ who felt that video blogs / TV Shows were a great idea.

The ‘Conference Welcome’ was well attended and included chairs and co-chairs of the event as well as the Mayor of Springfield, MA who absolutely nailed his speech.  It was immediately followed up by the talk, ‘What Can Our Ancestors Teach Us About Genealogy?’ presented by the amazing, Mary Tedesco (www.originsitaly.com). This was pretty much a history of Genealogy Societies, Libraries, Computers, and other innovations over the years.

We returned to the exhibit hall for a few and then our separate ways for the afternoon of workshops and lectures.

I’ll split off a moment and introduce the other part of the ‘we’ I’m referring to over the past couple of days.  Dick Gagnon is a fellow genealogy buff with many American Canadian ties.  He’s been heavily involved with the ACGS over the years and, he’s the station manager for Access Nashua, home of Discovering Your Past.  He’s also my camera man for the weekend as well.

I attended a workshop on Paleography led by Edward W. Strickland. This was a very informative workshop filled with tricks and tips. The second half included the class translating old records and doing our best at it. I teamed up with the woman sitting in front of me and we struggled together, made some breakthroughs, and learned quite a bit. I’d love to have Edward on the show someday to chat with us about this sometimes difficult task.

The second lecture for me today was ‘Treats and Treasures: New Jersey Repositories.’ Michelle Chubenko had a lot of information to cover and she only scratched the surface.  While we may have heard about 10 or so sites, the syllabus contains over 100 links!  I learned quite a bit about New Jersey History through the short hour (and a bit.) While today it is divided into North, Central, and South Jersey, back in the day before reliable land transportation, New Jersey was divided into East and West.  The Coastal routes of the Atlantic Ocean to the East was that days Garden State Parkway, while the Jersey Turnpike to the west was the Delaware River. I’d like to spend the remainder of the night searching sites off of the list but alas, it is indeed way to late as it is.

The society fair was next and it was a great time.  We pulled out the camera, connected to the internet, and viola! Live to YouTube. (The geek in me finds this technology just amazing!)  We spoke with as many of the societies as we had time for (I will try to actually list them out soon,) and one of the co-chairs of the NERGC Conference as well. While I’ll go through at a later time and edit the footage down, you can see our raw – very much so at times – footage directly on our NERGC YouTube playlist.  Thank you to all that participated – Including Investigative Designer, David Seah.

Last up of the evening were the Special Interest Group round tables.  I chose to attend the one for Bloggers led by the aforementioned Heather Wilkinson Rojo. We shared a ton of ideas and stories.  It was a great end to the day. 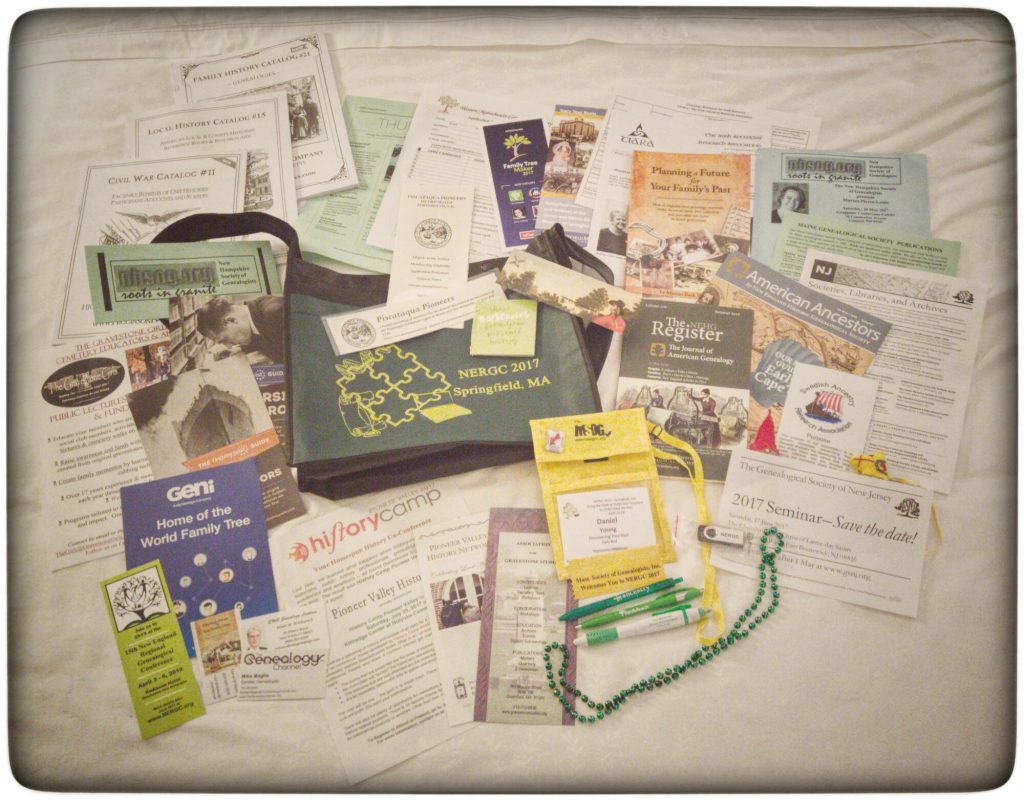 So much for keeping this short…  Tomorrow brings another packed day.  We should be live streaming around 9:00am to noon or so from the exhibit hall. With the delay in chat, and the difficult time keeping it open on the cell phone, I’ll probably have to skip that portion though I encourage all of the viewers to chat together on the YouTube page. If I get a break I will try to check it. Oh, and if someone knows how to see the chat from a mobile device please please let us know (I’ve hacked my web browser on it right now to display the desktop version of YouTube, but it’s not great.)

In the immortal words of many a post card – Having a Great Time, Wish You Were Here!