Yesterday the PBS series ‘Genealogy Roadshow’ filmed in Providence, Rhode Island at the amazing Public Library, and Sue and I were able to go and join in on the fun.  We had little idea on what to expect to see or do while we were there and I have to say we both were very, very happy with what there was to offer. 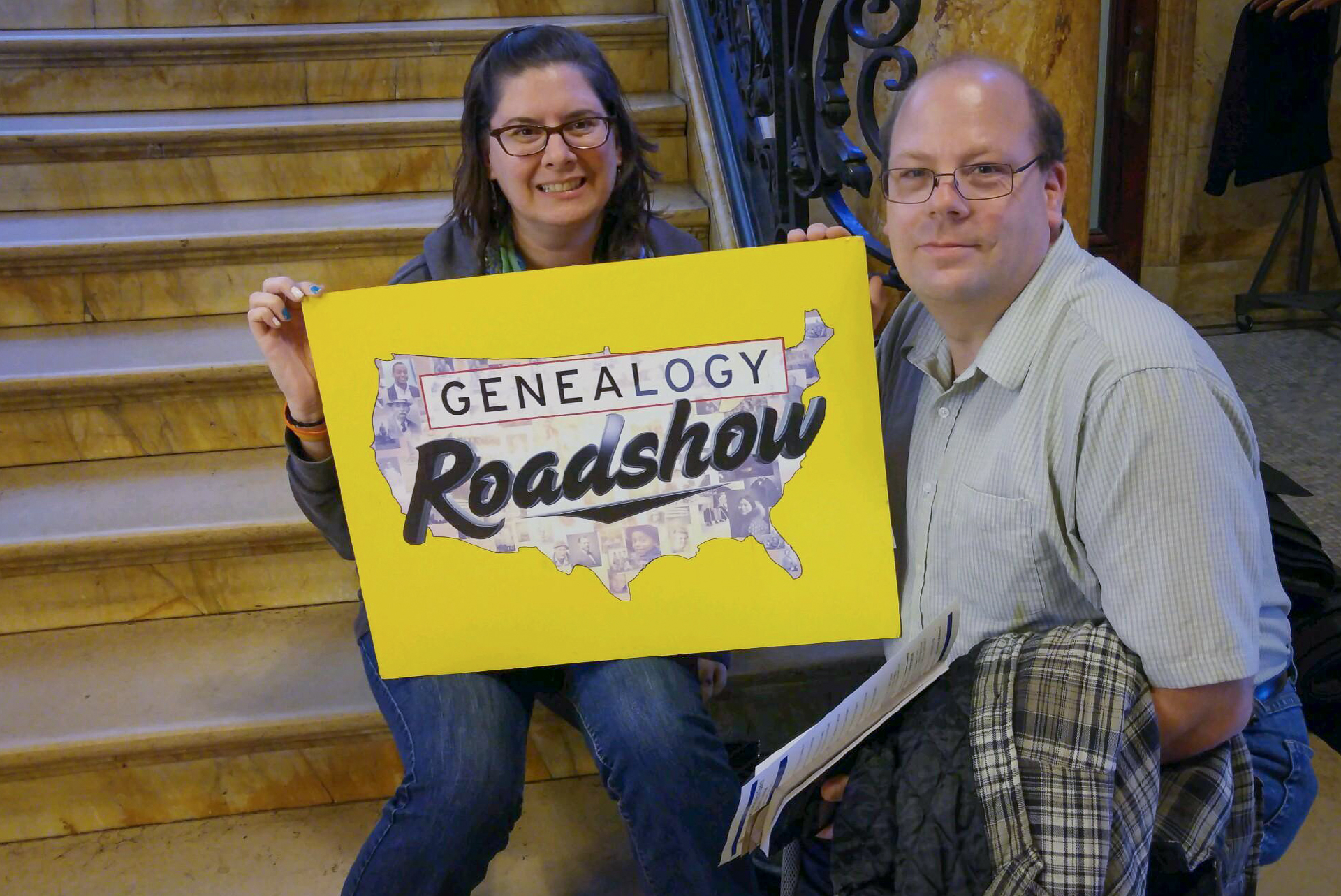 We were one of the first few people there on the very windy morning. After a short bit, a camera crew came out and filmed a few short bits talking to some of the folks in line, as well as some of the guests that were going to be on the show.  After a short while, we did a few staged ‘Walking into the Library’ shots and the led us to a holding area while they finished setting things up and to get us out of the cold. 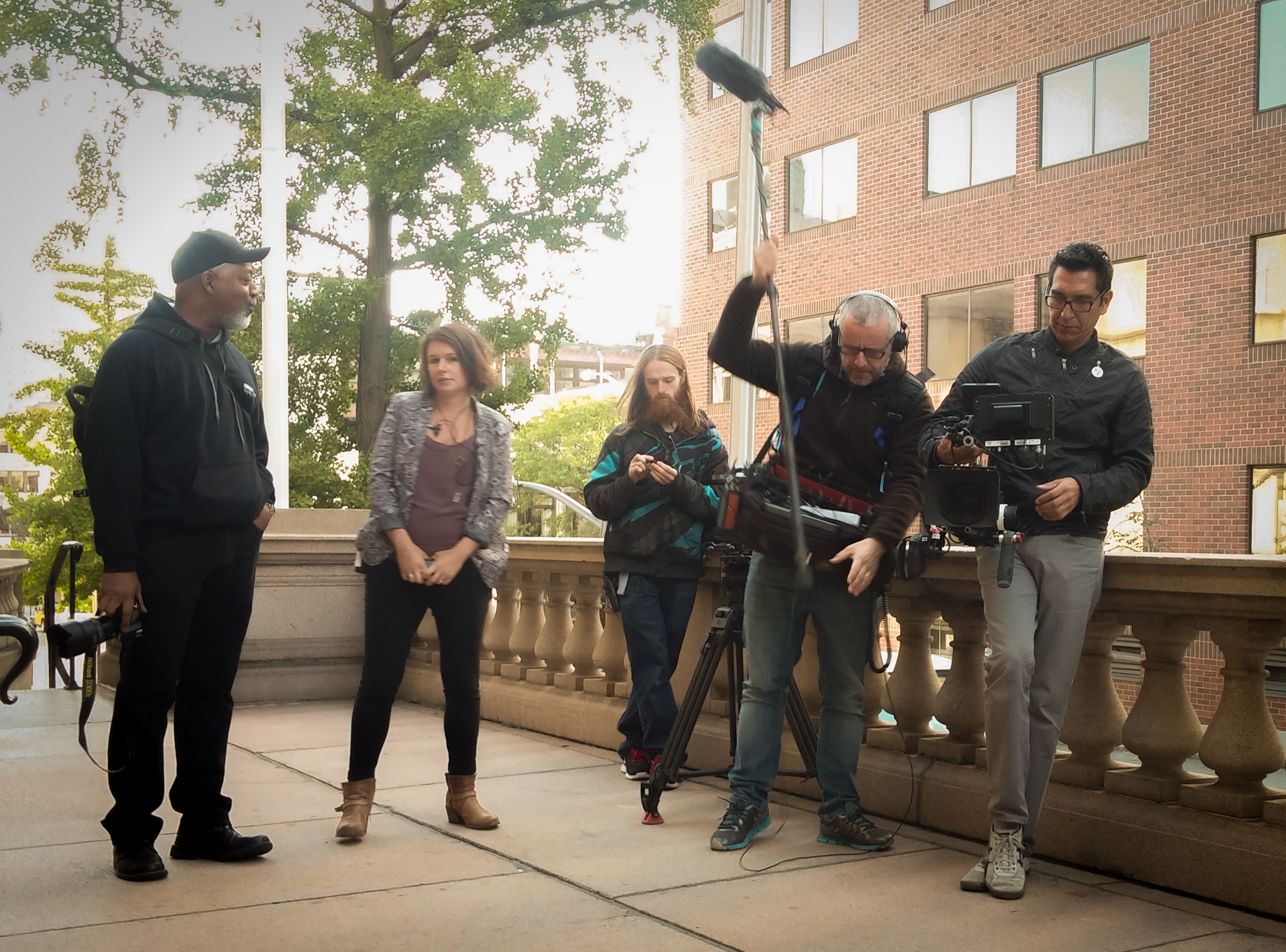 The camera crew that was filming all of the pick up shots. Left to right was the Still Photographer, a Producer, Production Assistant, Sound Guy, and Cameraman (and for those interested they were filming with a Canon C300)

I should back up a moment; there is a casting process to get onto the show that must be filled out long ahead of time. The information is on their web site and I would imagine at this point that any submissions would be considered for the next season.  The producers (or someone on the crew,) reviews the submissions and they pick the most interesting stories they receive.  It then seems that they will then choose the cites they film in based on the submissions.  For those of us that do show up that day, they do film a few people in line and wandering about the ‘Trade Show’ portion of the hall. 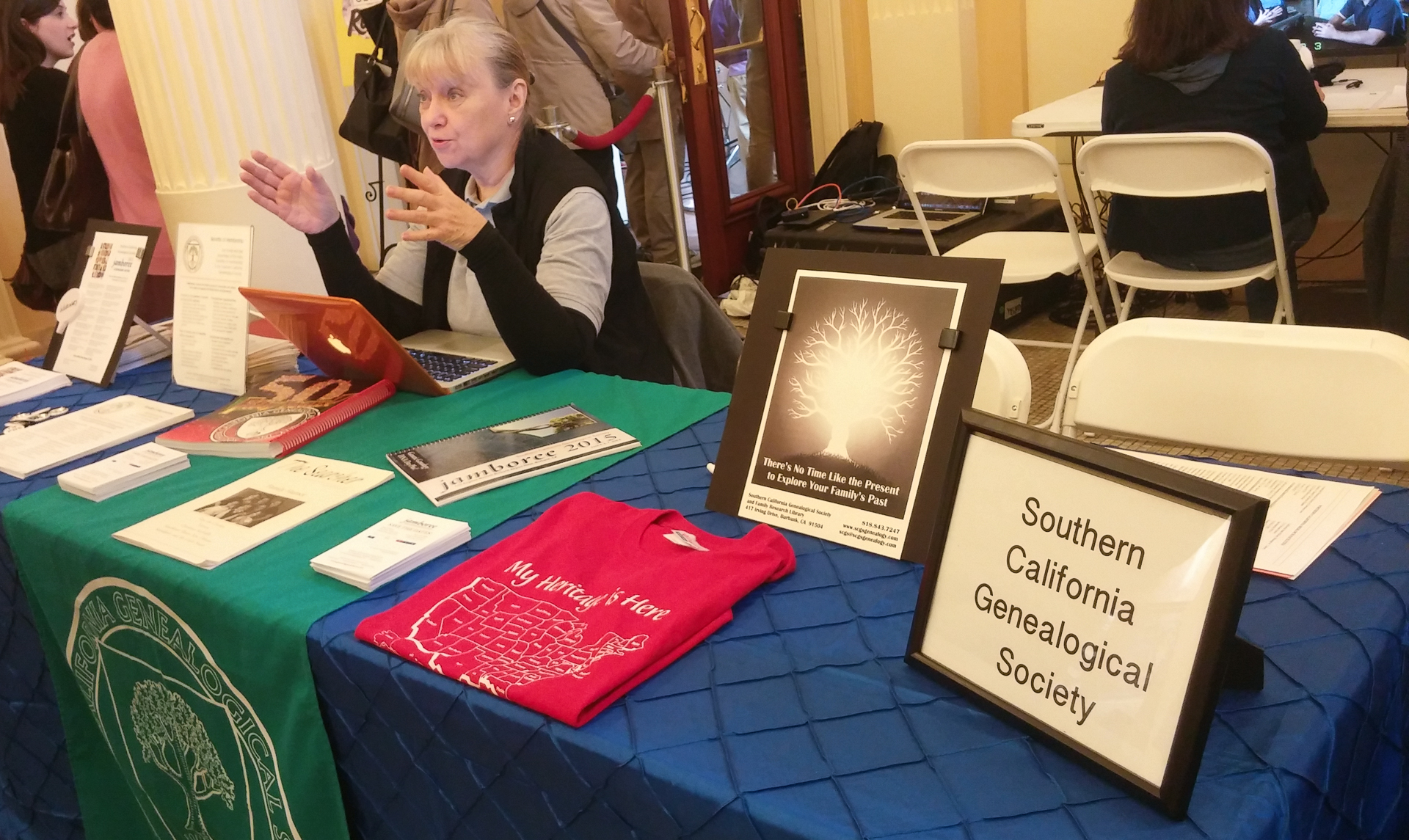 The Booth for the Southern California Genealogical Society

So once they were all set up and let us go ‘free’ we finally got a chance to see what there was.  Though the venue was small, they used the available space well and to make it look busier than it really was.  The day before they filmed in Boston and I was told it was much busier. 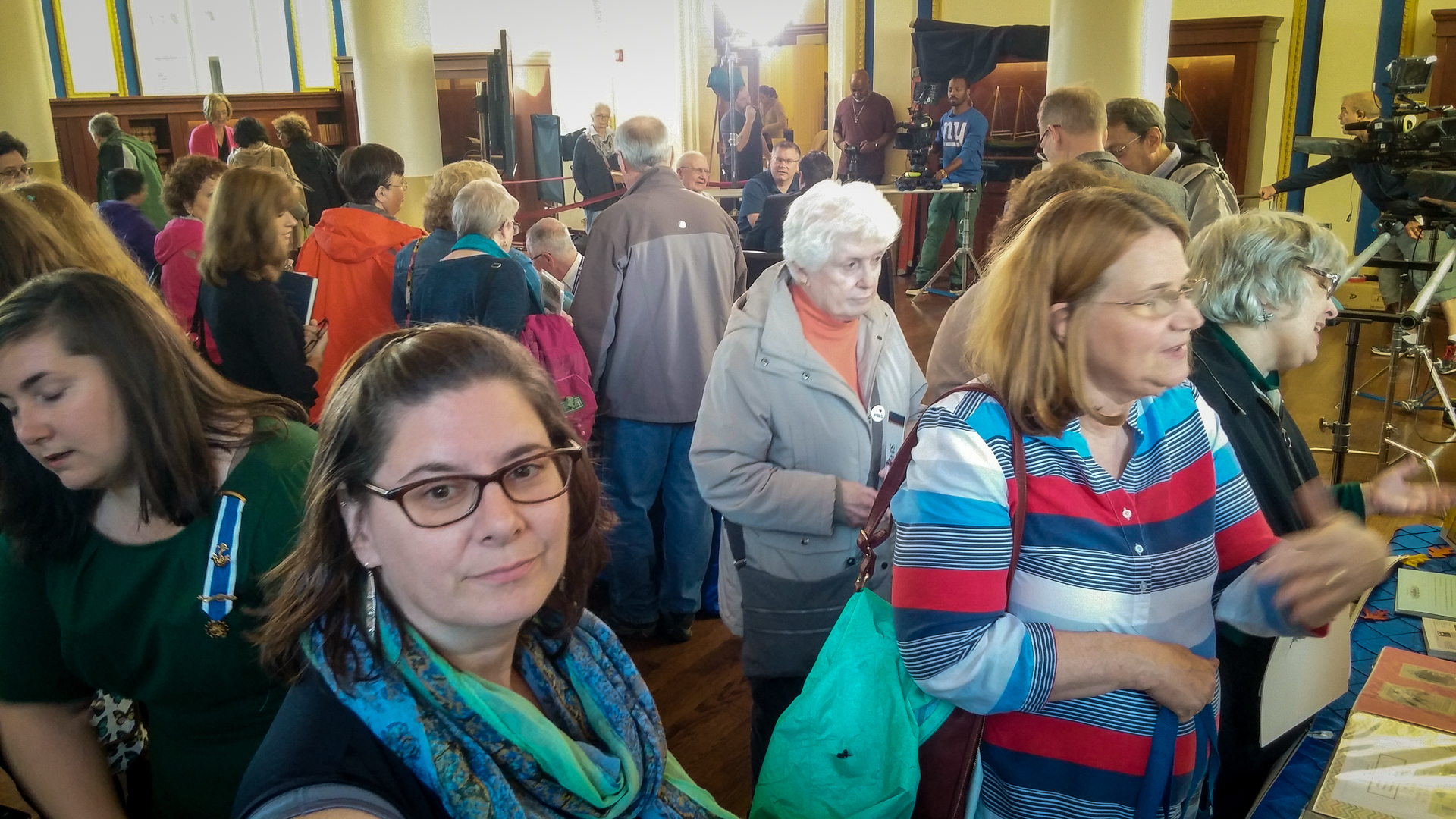 Looking back from one corner of the room.

We did wonder if there would be any independent genealogist there to ‘ask questions to’ much like you would see on Antiques Roadshow but here, at least in Rhode Island, there were none.  The people at the booths however were certainly happy to help in any way shape or form that they could and many had laptops and tablets to look information up.  If you do find yourself going to a roadshow, make sure you bring some cash as many of the vendors had publications, quick sheets, and other items to sell.  Sue and I did purchase a cookbook from the American-French Genealogical Society. 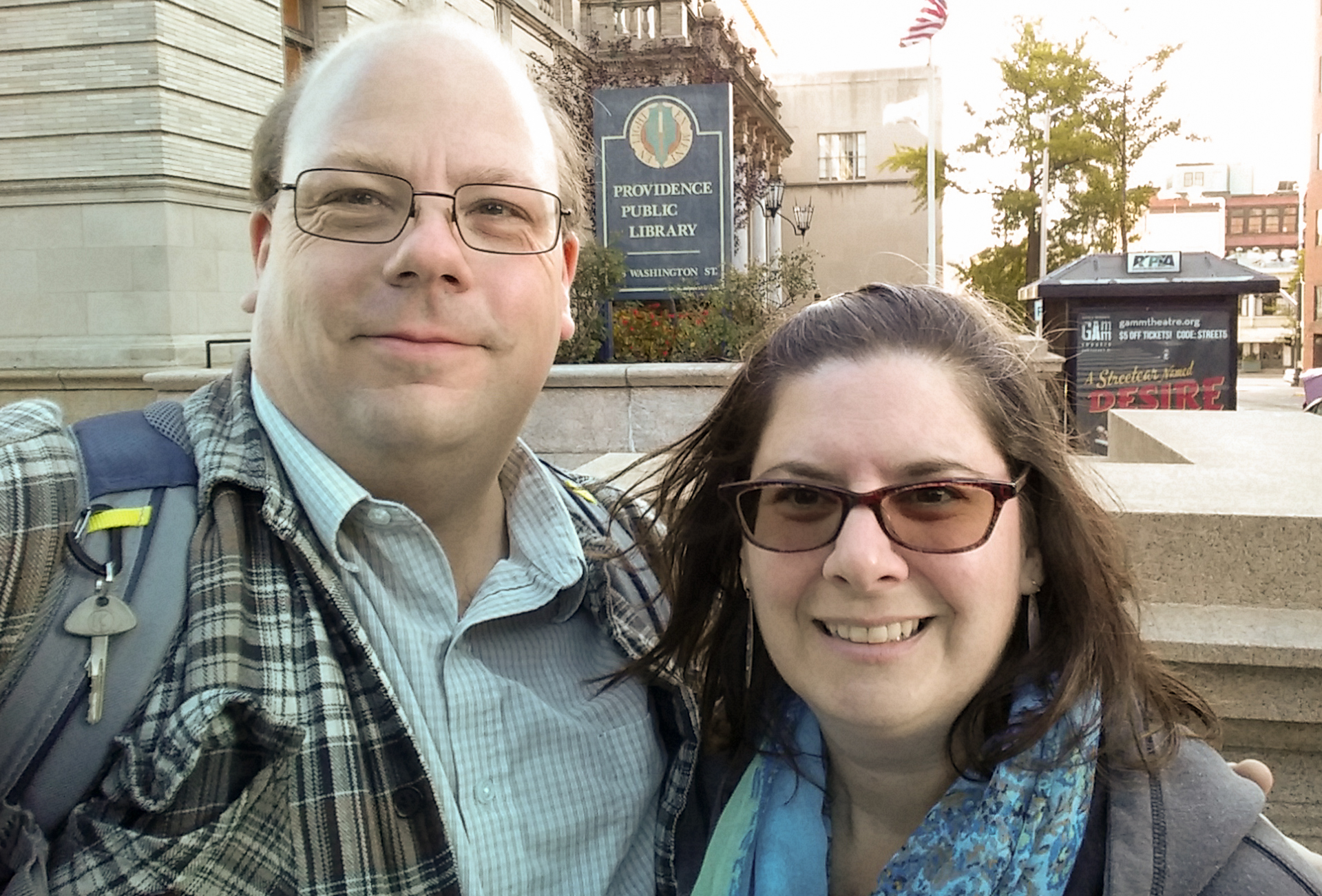 Sue and Dan outside the Providence Public Library, awaiting the Genealogy Roadshow to begin

While we were milling about, I especially had a fun time looking at all of the behind the scenes action from the camera men, production crew, lighting guy, and video village (the place where all the cameras get fed back to so the Director can watch the action)  It also turns out that Steve Kaye, the aforementioned Lighting Guy, was someone whom I have not seen in a very long time and we have worked on projects in the past.  He was able to show us a few extra behind the scenes items and it was fabulous to re-connect. 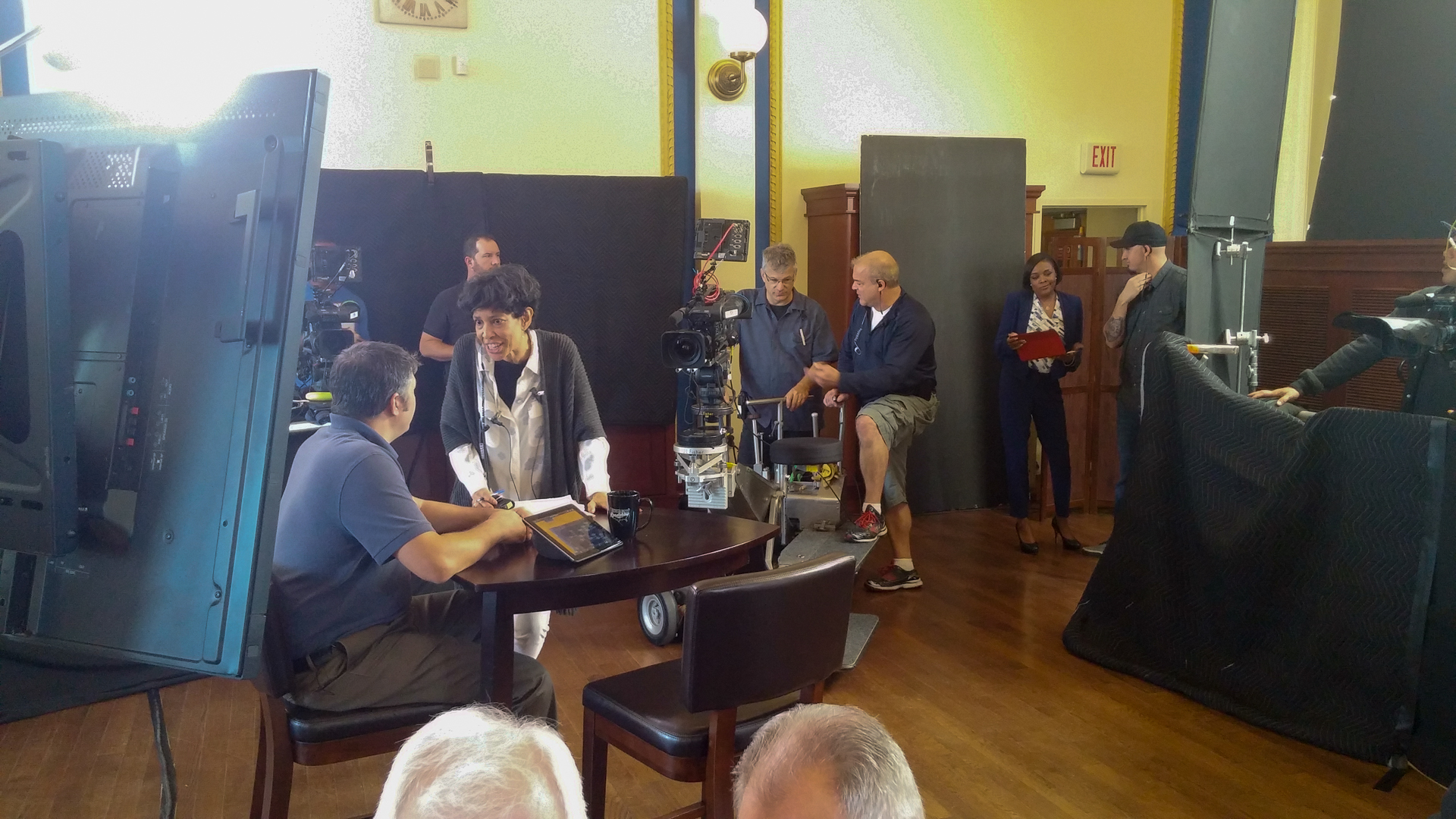 Setting up for one of the produced segments. The Man in the middle is Steven Kaye – The lighting guy.

If you have made it this far – Bravo and Thank You.

While Sue and I learned a lot of little things about the organizations, the two major props need to go out to the American-French Genealogical Society and the Rhode Island Historical Society. 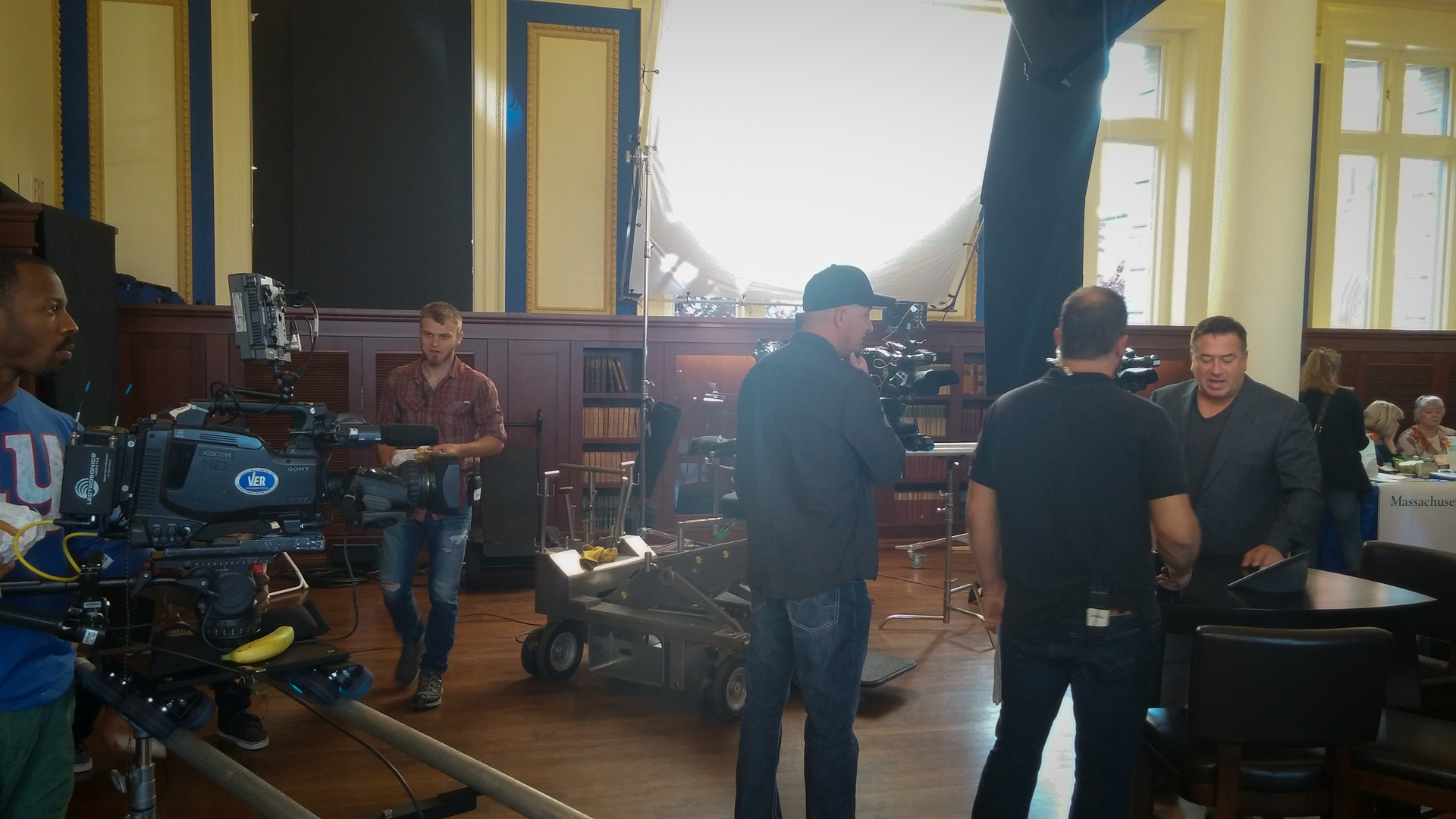 While Sue was chatting with the AFGS, one of the men behind the computer was able to find four generations in the Drouin Collection in a matter of a short time.  The Drouin collection is a listing of marriage records in Quebec.  These records include parents names and places of birth.  Most of this information was entirely new for her tree.  To say she was ecstatic is an understatement.  This was something that wasn’t even on her research plan radar but now – another set of plans to add. 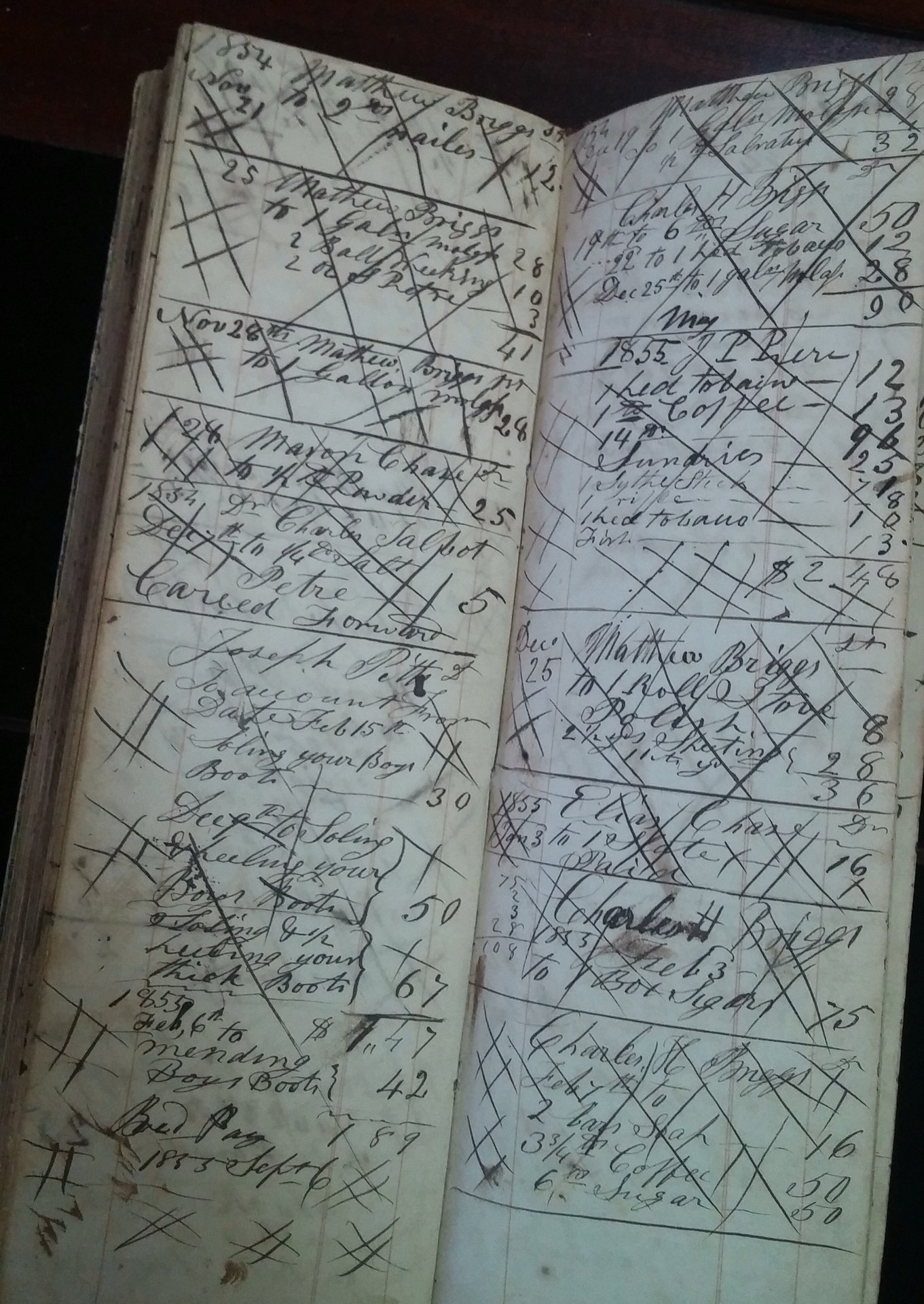 The book of accounts lists many fantastic items, prices, and names of people who shopped there.

For me, I have in my collection of family heirlooms two account ledger books from around 1850.  We recently learned that they may have been for a department store in of all places… Providence RI.  I have family members who lived in the general area – Dighton and Somerset MA, and it was included with a photo album (among other items) from them.  The woman I spoke to at the Rhode Island Historical Society was very inquisitive, took down a lot of information on the family tree and who I thought it may have belonged too along with many photographs.  She may even be researching it right at this moment.  I am hoping she may be able to find information as to why it may have ended up in the hands of my family.  In the end (unless she can tell me otherwise,) I plan to donate / loan the ledgers to the society as there is so much history in this book that must be shared. To quote Indy – “It belongs in a museum.” 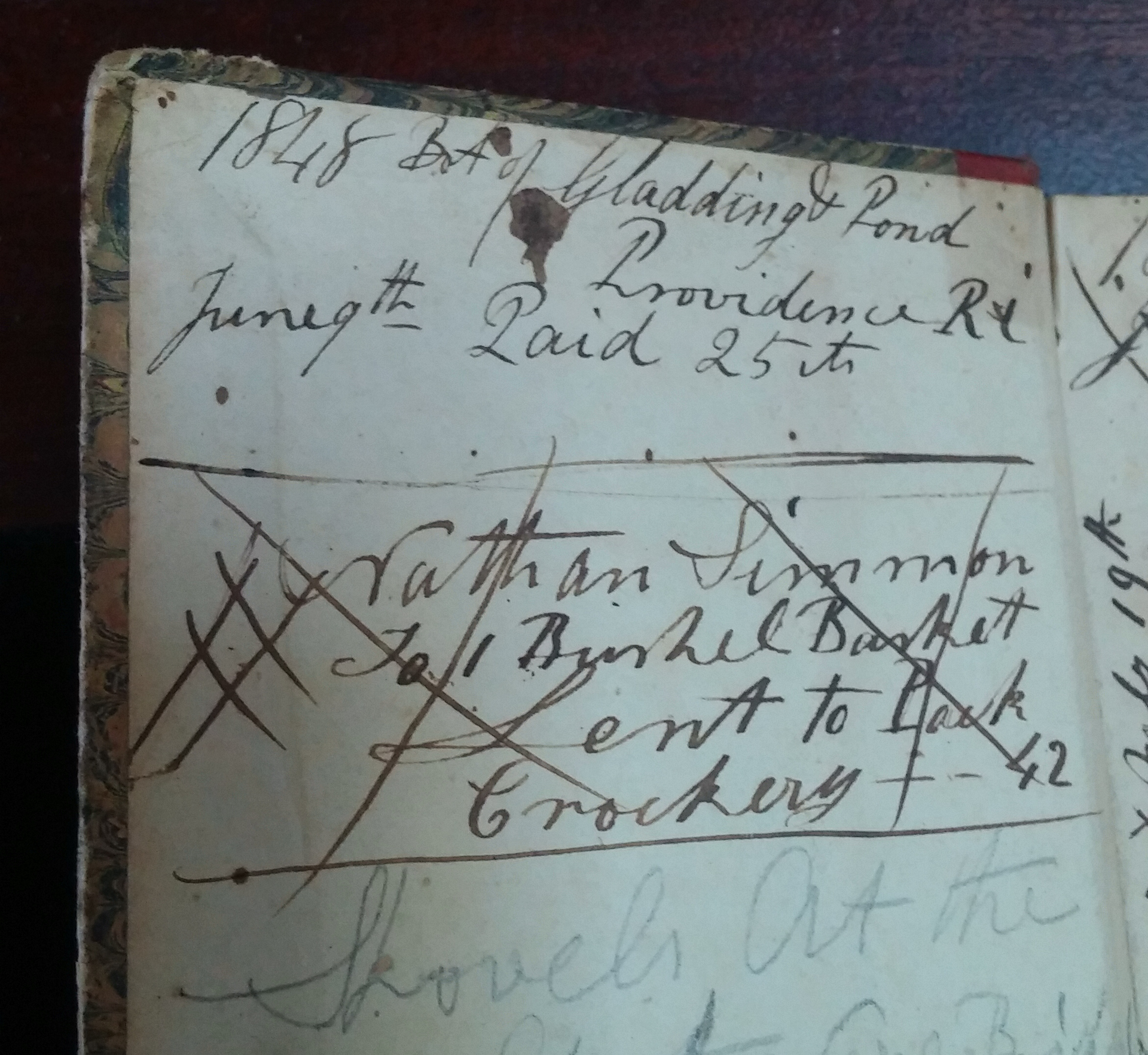 1848 Ledger of Accounts – Gladding and Pond, Providence RI. I have a Nathan Simmons in my tree – but I have nothing to connect these two names.

This also seemed to be my ‘On camera moment’ as in the middle of the conversation I realized there was a microphone boom over my head and the cameraman was pointed our way.  My nerves increased but I made it through.

Our tips if you end up going to one of the Genealogy Roadshow events:

If you have appeared on the Genealogy Roadshow (or if the producer is reading this,) I would love to learn more about that side of the table, and what those who are cast to appear can expect, and perhaps what they should not expect while going through the process. 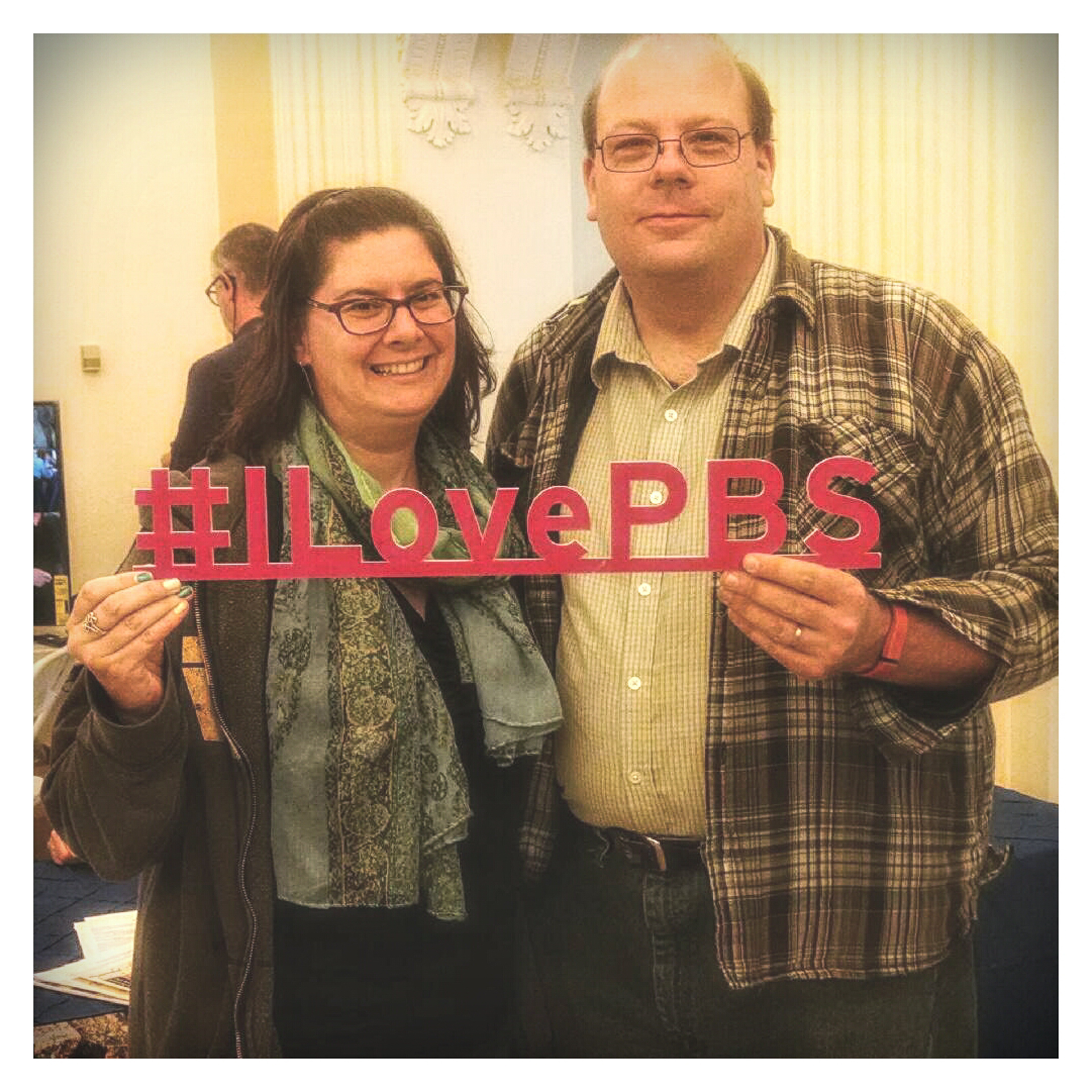 Among other signage, this was one of them.

4 thoughts on “Our Adventures at the Genealogy Roadshow”