Aug 26, 1943
Gave eskimo woman a suit of long underwear and two cakes of soap to do my laundry. 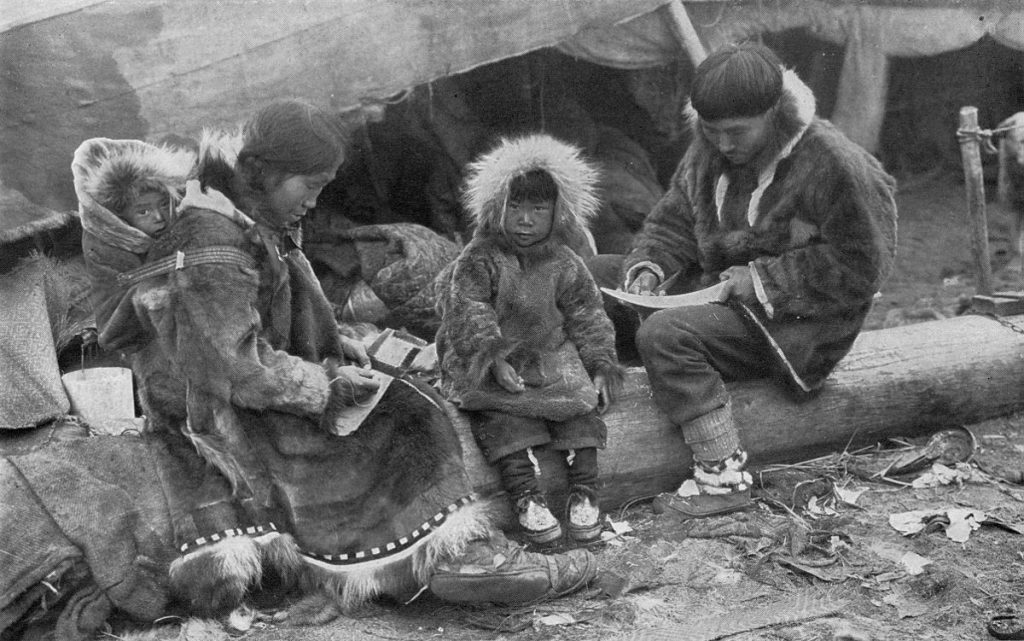 An Inuit family (1917) – “AN ESKIMO FAMILY. Tenderness and responsibility in their treatment of children is a virtue of the Eskimo which binds them closer to the brotherhood of civilized peoples.” [1]National Geographic Magazine, Volume 31 (1917), page 564 – Wikipedia Link

In reading this entry of Merton’s journal, I could only picture the poor woman leaning over into the frozen river with a washboard.  Probably a far cry from the truth but good for those ‘cold wash only’ items.

This is an interesting case in how learning about the past brings an ‘Ah Ha’ moment to the present.  There are a few ‘chores’ that if I could avoid them, laundry would indeed be one of them, though I believe that my wife would think that I would choose to avoid ALL of them.  Perhaps two chocolate cakes might do the trick.

The flip side to this argument however, is that my Mother loves to do laundry… and ironing.  I guess I take after my Grandfather more than Mom.

I am going to try to catch up on these – much like the mail.  I would imagine if he had received a letter from home that he might have mentioned it.  My Father would have been almost 12 years old at this point.  I wish I could ask him if he did ever write. END_OF_DOCUMENT_TOKEN_TO_BE_REPLACED

Weather stations on the East Coast of Greenland were very important installations.  This was the day before Doplar and Satellites.  The weather fronts from Greenland would routinely make their way on to Northern Europe and these stations could report and forecast so that the troops stood a better chance on the front.

It seems as if the German’s also had stations on Greenland and there were numerous expeditions to find and secure them.

If you are at all interested in the current weather in Kulusuk Greenland, follow this [Link] to The Weather Underground.  This year on August 13 it was a balmy 47 °F (8 °C).

Arrived at #2, met Capt. Shriffin who was stationed in Hyannis for long time.

Bluie East Two was a minor United States Army Air Forces (USAAF) airfield at Ikateq, East Greenland. It was operational from 1942 to 1947. ¹

I would be curious to find out who Capt Shriffin is.  Did Merton know him ahead of time or was the simple fact they were both in Hyannis the common denominator.  When researching Merton’s history on the cape, be it newspapers or other items, I will keep a look out for the Captain.

Just the journal entry for today I’m afraid. I will leave you pondering as I am, how thick are the interior walls of a ship?

#7 was the base at Kangilinnguit, right near Ivigtut.  Merton last mentioned that he was awaiting transfer to #7 on June 6th.  It surprises me that it took this long.  Perhaps it took the other man even longer which is why he ended up in the strait jacket.

Ivictut aka Ivigtut which is now known as Ivittuut, is located on the western side of Greenland.  I’ve written about it before way back on June 3rd [Link]

I found a video on YouTube by user ‘cputb1’ of his father’s days in Ivigtut Greenland during the late 1940’s.  The photographs encompass work, life and play and show a great cross section of what conditions must have been like.  I hope you enjoy.

Left #1 on the Iris, a Norwegian freight and passenger boat. 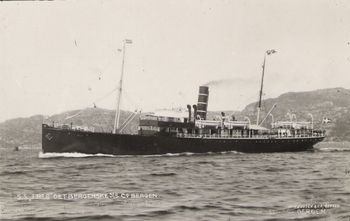 #1 was the code name of the base that Merton had been staying at.  I believe there were 7 in total.

The site warsailors.com has a great page on the history of the Iris including a crew list and convoy records. She rescued several sailors from ships sunk to U Boats over her carrer.

It is these old photos and documents that bring these journal pages to life for me.

The Norwegian site www.sjohistorie.no has another great photo of the ship as well.

Went to work in mess hall and had to shave off beard.

It has been almost a month since Merton’s last entry and I have to imagine that nothing important happened.  I believe that I read that the U Boat patrols have decreased due to the high number of Allied patrols searching for them so I believe the waters to be safer.

We all picture soldiers peeling piles of potato’s but what were they really eating?  While not Greenland specific – this short and informative video about the WW2 Mess hall produced by the U.S. Army Heritage Education Center gives an idea of what it may have been like.